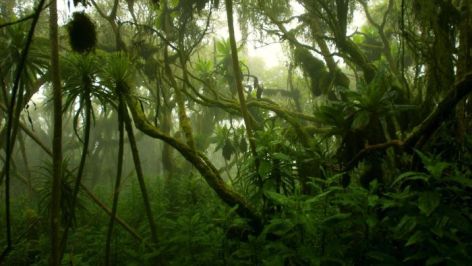 John Bowker, the creator of this song writes in Tribal Spirit Drumming:
“Whilst not actually a baka/mbuti piece, this is my attempt to honour the artform/culture/spirit tradition.  Meli e is one of the names given to the spirit of the forest.  This chant is a blessing song for the Meli e.  It has been sung many times in ritual retreats to send apologies to the forests and all the creatures wounded by human kind’s desecration of that magical environment.  I would appreciate it if this message could be communicated to listeners in any performance of this song either in an introduction or program notes”.
Note: The Baka live in the southeastern rainforests of the western Congo basin — including parts of Cameroon, Gabon and Central African Republic
The Mbuti are semi-nomadic people who live in the Ituri Forest of northeast Zaire.

A note from Betsy, who created the original teaching track: If you feel moved, please donate to http://globalmusicexchange.org/, the organization Su Hart and Martin Craddick started to preserve the music and homelands of the Baka people. John wrote his song in honor of the amazing music of the Baka people. Below is an image from the film Baka: A Cry from the Rainforest by Phil Agland.

The first track is a teaching track created by Betsy Sansby, which includes a rainforest backdrop of sounds. Betsy says: Feel free to add bird, insect, and rainforest sounds, using voice, drums, snapping fingers, anything.
The subsequent teaching tracks were created by Kaitie Ty Warren for The Living Room Choir.

A NOTE ON PRONUNCIATION: The name Meli E is pronounced Melly-ay, not Mali-E as it sounds in these recordings. That update will be made as soon as possible. Meantime, practice it as “Melly-ay”.